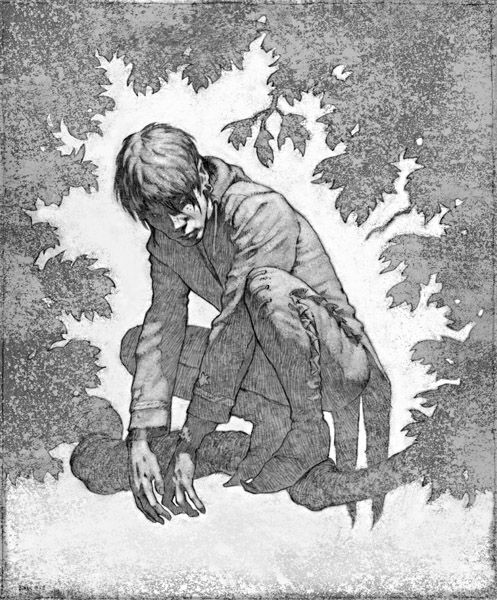 
The Child Thief is a page-turner of the highest calibre. Your email address will not be published. Leave this field empty.

I was looking forward to reading The Child Thief. Great review. Did you get to read it, Rebecca? Over the past few decades, Brom has lent his distinctive vision to all facets of the creative industries, from novels and games to comics and film. Brom is currently kept in a dank cellar somewhere just outside of Seattle.

In a small corner of Prospect Park, in the borough of Brooklyn, New York, a thief lay hidden in the trees.

This thief wasn't searching for an unattended purse, cell phone, or camera. This thief was looking for a child. In the dusk of that early-autumn day, the child thief peered out from the shadows and falling leaves to watch the children play.

The children scaled the giant green turtle, slid down the bright yellow slide, laughed, yelled, teased, and chased one another round and round. But the child thief wasn't interested in these happy faces. He wasn't looking to steal just any child. He was particular.

He was looking for the sad face, the loner And the older the better, preferably a child of thirteen or fourteen, for older children were stronger, had better stamina, tended to stay alive longer. The thief knew Mother Luck had smiled on him with the girl.

She'd been a good catch, too bad about her father. He smiled, remembering the funny face the man had made as the knife slipped into his chest. But where was Mother Luck now? He'd been hunting for two days.

He'd come close with a boy last night, but close wasn't good enough. Grimacing, the thief reminded himself that he had to take it slow, had to make friends with them first, gain their trust, because you couldn't steal a child without their trust.

Maybe Mother Luck would be with him tonight. The child thief had found city parks to be good hunting grounds. Strays and runaways often camped among the bushes and used the public restrooms to wash, and they were always looking for friends.

As the sun slid slowly behind the cityscape, the shadows crept in—and so did the thief, biding his time, waiting for the falling darkness to sort the children out. Nick darted into the warehouse entryway, pressed himself flat against the steel door, his breath coming hard and fast. He leaned his cheek against the cold metal and squeezed his eyes shut. So screwed.

Dark, choppy bangs spilled across his narrow face, emphasizing his pallid complexion. He needed a haircut, but of late his hair was the last thing on his mind. Nick dropped his pack to the ground, pushed his bangs from his eyes, and carefully rolled up one sleeve of his black denim jacket. He glanced at the burns running along the inside of his forearm and winced. The angry red marks crisscrossing his flesh crudely formed the letter N.

You Review: The Child Thief by Brom

He tried to put the nightmare out of his mind, but it came back to him in heated flashes: the men pinning him to the floor—the floor of his own kitchen. The sour, rancid taste of the dish sponge being crammed into his mouth. Marko, big, thick-necked Marko, with his beastly grin, smirking while he heated the coat hanger against the burner. The wire smoking then turning red then God, the smell, but worse, the sound, he'd never forget the sound of his own flesh sizzling. Trying to scream, only to gag and choke on that gritty, soggy sponge while they laughed. Marko right in his face, Marko with his long, straggly chin hairs and bulging, bloodshot eyes.

It's for Narc. His style is fast, and furious, as are the twists in the tale. Brom raises the issue of humanity, good and evil, and justice with brilliant ease. The one aspect I found hard to stomach at times was the violence. Brom explains in his endnotes he was surprised to find the original by Barrie much more implicitly violent than he could have imagined.

He chose to highlight this violence in his version, and this conscious choice did get a little tiresome for me.